When a Falcon 9 rocket lifted off from Vandenberg Space Force Base in California on Friday, Elon Musk’s SpaceX broke a calendar year launch record.

It was the 32nd launch of 2022. The intense activity is due to the company’s race to build a constellation of Starlink broadband satellites.

Friday’s mission keeps SpaceX on pace to reach its goal of 52 orbital missions by year’s end, nearly doubling its annual launch total with the reusable Falcon 9 that SpaceX says can be reflown up to 15 times.

A majority of those missions have been in-house Starlink missions.

The company, founded by Musk in 2002, has in recent months shifted its focus from manufacturing Falcon 9 rockets to managing a fleet of those already built, investing heavily in infrastructure for refurbishing boosters under speedy timelines.

The company has applied the same strategy to its fleet of reusable Crew Dragons – gumdrop-shaped spacecraft that launch atop the Falcon 9 and ferry humans to orbit and the International Space Station.

SpaceX has launched Starlink satellites to space quicker than its rivals in the satellite internet race, such as satellite operator OneWeb, due in part to Falcon 9’s rapid reusability and the edge associated with using in-house rockets. 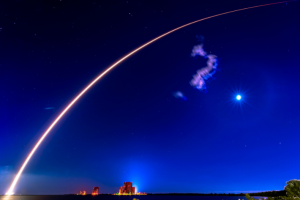