BlackRock chief executive Larry Fink said on Thursday that the Russia-Ukraine war could end up accelerating digital currencies as a tool to settle international transactions, as the conflict upends the globalisation drive of the past three decades.

In a letter to the shareholders of the world’s largest asset manager, Fink said the war will push countries to reassess currency dependencies, and that BlackRock was studying digital currencies and stablecoins due to increased client interest.

“A global digital payment system, thoughtfully designed, can enhance the settlement of international transactions while reducing the risk of money laundering and corruption,” he said.

That appeared to strike a different tone from May of last year, when Fink raised some concerns around volatility and said it was too early to determine whether cryptocurrencies were just a speculative trading tool.

In the letter on Thursday, the chairman and CEO of the $10 trillion asset manager said the Russia-Ukraine crisis had put an end to the globalisation forces at work over the past 30 years.

Access to global capital markets was a “privilege, not a right”, he said, adding BlackRock had suspended the purchase of any Russian securities in its active index portfolios following Moscow’s invasion of Ukraine.

“Over the past few weeks, I’ve spoken to countless stakeholders, including our clients and employees, who are all looking to understand what could be done to prevent capital from being deployed to Russia. We believe this is the definition of our fiduciary duty,” Fink said.

BlackRock’s total client exposure to Russia had declined to less than $1 billion earlier this month from $18 billion before Moscow’s invasion of Ukraine led to Western sanctions and the closure of the Russian stock market.

The conflict’s impact on global supply chains – already hammered over the past two years because of the coronavirus crisis – is expected to contribute to inflationary pressures that are pushing global central banks to tighten monetary policies and reverse Covid-19-driven accommodative measures.

“While companies’ and consumers’ balance sheets are strong today, giving them more of a cushion to weather these difficulties, a large-scale reorientation of supply chains will inherently be inflationary,” Fink said.

He said central banks were dealing with a dilemma they had not faced in decades, having to choose between living with high inflation or slowing economic activity to contain price pressures.

Energy prices have jumped as sanctions on Moscow prompted companies and countries to reassess supply chains and to try to reduce dependence on Russian commodities. 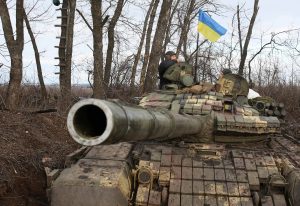 ‘Unprecedented’ China Cash Flows May be Linked to Russia: IIF