Asian stocks edged ahead on Friday though gains were limited by ongoing growth fears and the death of Japan’s former prime minister Shinzo Abe who was shot and killed on the campaign trail.

The attack saw a pull-back in shares across the region but the Nikkei and Hang Seng managed to post small advances at the close while China’s markets were pushed back by worries over new Covid-19 flare-ups.

Tokyo’s Nikkei index shed most of its early gains to end flat after the shooting of Abe while campaigning for a parliamentary election.

“There must have been mixed reasons for the Nikkei cutting gains today but the accident [of Abe] was one of them, as I believe he still has influence on Japan’s economic and monetary policy,” Jun Morita, general manager of the research department at Chibagin Asset Management, said.

Abe, best known for his signature “Abenomics” policy that featured bold monetary easing and fiscal spending, was shot from behind by a man with a homemade gun and later died of his injuries.

“Abe’s [death] could affect the Bank of Japan’s ultra-loose monetary policy, which is not positive to the stock market,” Morita said.

MSCI’s broadest index of Asia-Pacific shares outside Japan was still up 0.3% on the day, but had retreated from the eight-day high hit earlier in the session.

Both China’s blue-chip CSI300 Index and the Shanghai Composite Index fell 0.3% at the close, reversing early gains, and posting their first weekly loss in six.

The market was not helped by signs of lingering Sino-US tensions. A senior Chinese military officer warned his US counterpart on Thursday that any “arbitrary provocations” would be met with a “firm counterstrike” by China.

Eyes on US Payroll Data

Globally, European shares opened slightly lower on Friday but struggled to make gains after the shooting of Japan’s former prime minister while investors waited for key US jobs data later in the session.

The latest indicator of the health of the US economy is due later in the day with the release of US non-farm payrolls data. The consensus expectation is for 268,000 jobs to have been added in May.

Oil prices were down, with Brent crude futures and US West Texas Intermediate crude set for a weekly loss. 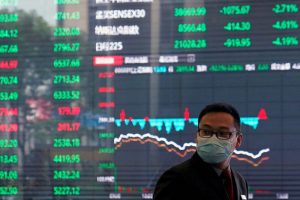