Asian stocks suffered again as fears over global growth, looming recession and the ongoing war in Ukraine weighed on confidence.

Japan’s Nikkei ended at near two-week low amid slowdown jitters and even China’s markets were in retreat after days of steady gains off the back of easing Covid restrictions.

Wall Street ended lower overnight, with the benchmark S&P 500 posting its steepest percentage drop for the first six months since 1970, amid concerns over the Ukraine-Russia war, soaring inflation, higher interest rates and, more recently, a possible US recession.

Lifting sentiment, a private-sector poll showed China’s manufacturing activity expanded at its fastest in 13 months in June, the first expansion in four months and matching with the findings in an official survey on Thursday.

Tourism stocks tumbled nearly 5%, but were still up 7.5% this week as investors found comfort in the easing of Covid-19 rules.

Elsewhere across the region, the Taiwanese stock index slid 3.3%, its worst session since May 2021, prompting its deputy finance minister to call for investor calm.

Indonesian stocks plummeted 1.7%, although Malaysian and Thai stocks managed to rise 0.5% and 0.3% respectively.

Globally, the second half of the year started with another drubbing for stock markets on Friday, as the recession concerns that have built in recent weeks also shoved oil and metals lower again.

MSCI’s world stocks index has had its worst start to a year since its 1990 creation over the last six months and in the US the S&P 500 futures were pointing lower again after the benchmark index closed out its worst first-half since 1970 on Thursday.

The Fed’s rapid rise in interest rates mean the Treasury market took such a beating that Deutsche Bank estimated the half’s performance was the poorest since 1788.

It has been hints of peaking inflation and signs of weak growth that have started steadying bond markets, though.

Dollar on The Charge Again

Two-year Treasuries are on course for their best week since markets’ pandemic meltdown of March 2020 as traders now wind back rate hike bets.

The dollar was on the front foot again on Friday, having just scored its best quarter since 2016 as US yields rose. Its reputation means economic uncertainty has kept it supported even as yields have retreated.

Bitcoin, which suffered its biggest quarterly drop on record over the three months to the end of June, fell 3% to $19,375 on Friday. 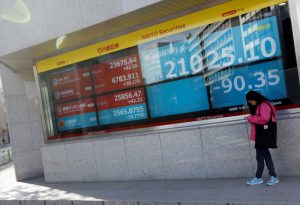