Asian stocks were mixed on Thursday, with many subdued by news that officials in parts of Shanghai were imposing new Covid-19 restrictions, while investors worried about the impact of potential rate hikes ahead of a European Central Bank meeting later in the day.

Asia’s cautious tone persisted into European markets, where stock futures pointed to a lower open across the board. Moves were relatively muted ahead of the ECB meeting, which is set to bring an end to the bank’s Asset Purchase Programme and signal rate hikes to combat rising inflation. Many investors were holding to the sidelines.

As investors guess at the size and pace of ECB tightening, they are also awaiting US consumer price data on Friday that the White House has said it expects to be “elevated”.

Residents of Shanghai’s Minhang district were ordered to stay home for two days in a bid to control coronavirus transmission risks, with daily national Covid cases also rising slightly during the week.

“The uncertainty over Covid outbreaks means Chinese equities are still likely to be susceptible to start-stop cycles,” BNP Paribas analysts said in a note.

China’s exports grew at a double-digit pace in May, shattering expectations, while imports expanded for the first time in three months as Shanghai and Beijing relaxed curbs.

Despite a decline, foreign investors were net buyers of China stocks on Thursday, with Refinitiv data showing inflows of more than 6.2 billion yuan ($930 million) through the Stock Connect programme.
Tech giants listed in Hong Kong closed down 1.4%, after jumping 4.8% on Wednesday following a series of positive developments in the sector.

“The market is still concerned about the regulation of data, but based on recent good news, the clampdown over the past year seems to have come to an end,” said Linus Yip, chief strategist at First Shanghai Securities.

Japan’s Nikkei index ended Thursday little changed after a rollercoaster session that at one point took it to a five-month high, before the drag from shippers and chip shares countered gains by energy companies and automakers.

The Nikkei had rallied close to 10% over the four weeks to Wednesday, leaving investors wondering about its next move.

“From a technical point of view, the Nikkei’s recent rally seems heated, and a correction at any moment wouldn’t be unusual, but right now stocks are getting support from the yen’s steep decline,” Nomura Securities strategist Maki Sawada said.

Car and motorcycle manufacturers have rallied amid the yen’s rapid decline to ever deeper two-decade lows, boosting the value of US sales. The currency sank as low as 134.56 per dollar on Thursday for the first time since February 2002.

South Korean shares also ended flat as optimism from stronger-than-expected exports data from China was countered by concerns around a key US inflation reading. The Korean won weakened, while the benchmark bond yield ticked up.

Australian shares fell to near four-week closing lows on Thursday, with banks tumbling further as the central bank’s largest interest rate hike in more than two decades raised concerns about the housing market.

Iron ore behemoths BHP and Rio Tinto dropped 2.4% and 1.2%, respectively. Bucking the trend, energy stocks climbed 0.56% and were the only gainers on the benchmark, with oil and gas major Woodside Energy group up 1.9%. 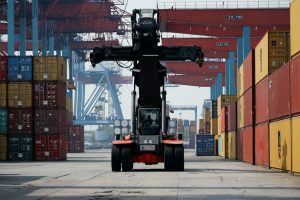