Asian stock markets were in a nervous mood on Monday as China’s deepening Covid situation and surging prices weighed on sentiment.

With Shanghai and Beijing both tightening Covid measures, the yuan touched a new 18-month low and Chinese blue-chip shares fell – and adding to traders’ woes was news that China’s exports slumped in April to their lowest level in almost two years.

Also on AF: Dollar at 20-Year High Amid Concern on Rates, Ukraine, China

The jitters reverberated across Asian trading floors with Australia, Singapore and Seoul retreating. Tokyo’s Nikkei index closed down more than 2.5%, while China’s two mainland indices – Shanghai and Shenzen – saw a slight lift later in the day.

China liquor makers were among the biggest losers, over  concerns over the widening impact of Covid curbs, with a sub-index tracking the sector dropping 2.19%

Chinese automakers also fell after an industry group estimated that sales in April had dropped 48% year-on-year, as zero-Covid policies shut factories, limited traffic to showrooms and put the brakes on spending.

The smaller Shenzhen index ended 0.35% higher and the start-up board ChiNext Composite index was weaker by 0.753%. Markets in Hong Kong were closed for a public holiday.

Around the region, MSCI’s Asia ex-Japan stock index was 1.23% weaker, while Japan’s Nikkei index closed down.

Elsewhere, the dollar rocketed to a new two-decade high as worries about higher interest rates and the tightening lockdowns in China deepened investors’ fears that the global economy is headed for a slowdown.

Central banks in the United States, Britain and Australia all raised interest rates last week, and investors are bracing for more tightening as policymakers try to get on top of soaring inflation.

Adding to those slowdown fears is speculation that Russian President Vladimir Putin might declare war on Ukraine. Putin has so far characterised Russia’s actions in Ukraine as a “special military operation”, not a war.

Despite the sharp rise in rates, not all investors think a slowdown is imminent.

“We continue to believe investors should position for the reality of inflation now, rather than the chance of a recession soon,” UBS Global Wealth Management strategists said.

Investors are also tense ahead of the US consumer price report due on Wednesday. Only a slight easing in inflation is forecast, and certainly nothing to prevent the Federal Reserve from hiking by at least 50 basis points in June.

Core prices are actually seen rising by 0.4% in April, the monthly rate accelerating from 0.3% in the previous month, even as the annual pace dips a bit due to base effects.

With investors juggling so many worries, one place they are looking for safety is in the dollar, which is soaring against most other currencies.

The dollar index, which measures the greenback against a basket of currencies, rose as much as 0.4% to 104.19, the latest in a string of 20-year highs.

The soaring dollar is hammering other currencies. The euro dropped back below $1.05 while the Japanese yen fell to its weakest since 2002.

Expectations that the Fed will move more aggressively in raising interest rates are supporting the dollar, as is a sense among investors that the US economy will hold up better than a euro zone hit hard by the fallout from the war in Ukraine.

Oil prices see-sawed after the Group of Seven nations committed on Sunday to banning or phasing out imports of Russian oil over time.

Key figures at around 0720 GMT

Russian Imports to China Jump by 56% in April, But Exports Fall 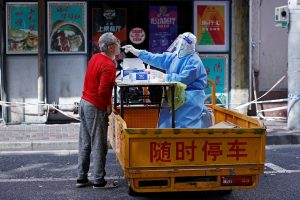 US Business Confidence in China Getting Worse, AmCham Warns 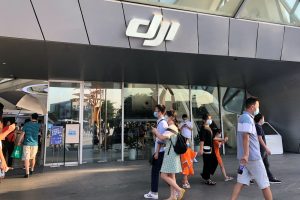 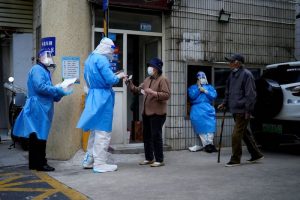 Millions in Beijing Queue for New Round of Covid-19 Tests
Tags: 2022正规配资平台 股票配资门户