Sri Lanka’s creditors face losing up to half of their investments in the country’s dollar bonds, after the government announced it would restructure $11 billion worth of debt, the first financial shake-up of its kind in its modern history.

Formal debt talks haven’t started but analysts are already crunching the numbers to estimate what kind of losses could be inflicted on bondholders.

Mired in economic crisis, Sri Lanka has halted all external debt payments and is prioritising its remaining hard currency reserves to buy food and fuel.

The country of 22 million has been hit by nationwide street protests and shortages of everything from power to medicines, and its dollar bonds trade at deeply distressed levels of around 40 cents in the dollar.

With markets factoring in an International Monetary Fund (IMF) loan programme as part of the debt overhaul, a $1 billion bond maturing on July 25  is valued at around 45 cents in the dollar, Refinitiv data showed.

Citi projects that, across the bonds maturing between 2022 and 2030, Sri Lanka may seek a coupon haircut of around 50%, a reduction of at least 20% in face value and maturity extensions between 10-13 years.

“Assuming an 11% exit yield, we estimate that the recovery value on the dollar bonds in such a scenario could range in the low to mid-40s,” Citi strategist Donato Guarino said, referring to the interest rate at which the new securities will trade on the day of the debt exchange.

Step-up coupons – interest payments that increase over time – could also play a role “to give the government more time to recover” after the restructuring, Guarino added, noting these were used in Ecuadorean and Argentine debt restructurings.

Tellimer analysts assumed in their base case scenario a 30% haircut. They assign a recovery value near 60 cents on the dollar for the bonds, with a 8% exit yield.

They also flagged an alternative scenario with a 42-cent recovery value and a 16% exit yield.

Tellimer senior economist Patrick Curran considers a 50% haircut a “worst case” scenario, with a recovery value as low as 30 cents for a 16% exit yield.

He highlighted the possibility that the debt overhaul might not be as swift as hoped.

“While bondholders will receive some downside protection if negotiations drag out if interest is capitalised, prolonged delays will also make for a more onerous starting point and political risk will raise exit yields, potentially eroding recovery values,” Curran added.

Ratings agency S&P Global has said debt talks could be complicated and take “many months” to complete.

On Wednesday, it lowered Sri Lanka’s foreign currency rating to “CC” from “CCC” – two notches above the level denoting default – while Fitch cut its rating to “C” from “CC.”

JPMorgan analysts say the debt servicing moratorium is expected to pave the way for an IMF programme but warn a restructuring might be “more comprehensive” than what has been announced.

As of now, the debt service suspension only covers about 55% of public debt, Citi calculates, noting the latest IMF report hints at a “tough programme ahead.”

Asset managers BlackRock and Ashmore are among the top holders of Sri Lanka’s international bonds. They are part of a fledgling creditor group, with White & Case acting as legal adviser.

Bondholders are in wait and see mode until the government picks a financial adviser, one creditor said, speaking on condition of anonymity.

“The group’s idea so far is to be reactive, not proactive,” the source said. 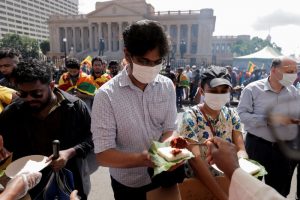 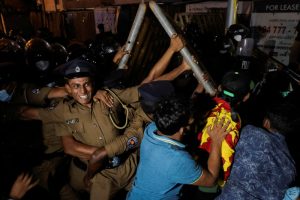 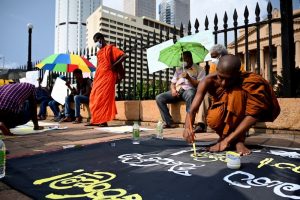 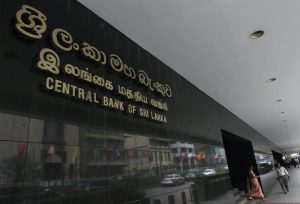